The Twins (Gladiators of Krix)

One night of fun wasn't supposed to end up with Kennedy pregnant...

Us human women that survived the crash of our ship were taken as slaves. Trapped on the gladiatorial planet of Krix, we live and die by the whim of our masters. If they find out I'm pregnant, I'll be in even worse danger. Will they let me live? Will they take away my baby?

It was one night with the lithe, sexy blue aliens called the Twins. Just one night. A night filled with star-white hair, tantalizing fangs and more hard muscle than a single girl could handle.

But now I might be not only trapped on this planet, but trapped with these two aliens who will claim me as their's even though they don't know me and it's only lust, not love that brought us together.

We are an oddity among the Alvan. Born as two instead of one, we share a mind-- our thoughts and feelings always known to each other. This bond is the same as shared among mates of the soul, Pari our people call it.

We've always assumed this meant we would never form this bond with others. Never know this connection with a female. Until Kennedy. There was something there the single night she chose to come to us.

A night that left us wanting more, no matter the cost or danger to our lives being slaves brings.

Spinning off from best-selling series the Red Planet Dragons of Tajss comes a new set of books, the Gladiators of Krix. From USA Today Bestselling Author Miranda Martin and her soulmate James D Horton, The Twins is a full length, standalone SFR novel with a happily ever after ending, plenty of steam, thrilling arena competitions and house politics. Fans of the Celestial Mates Alva series will recognize these sexy blue-skinned aliens!

Ready to dive in to the exceptional worlds of Miranda Martin? Choose one of the novels below. 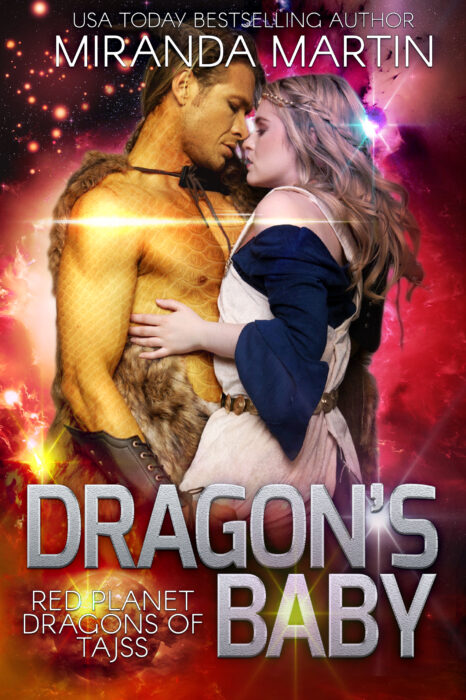 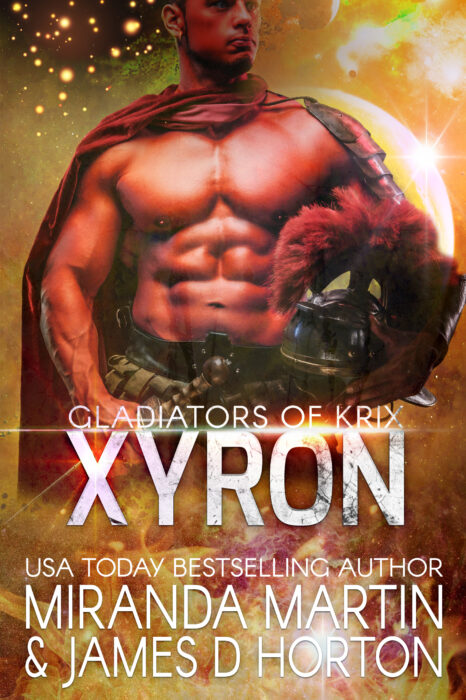 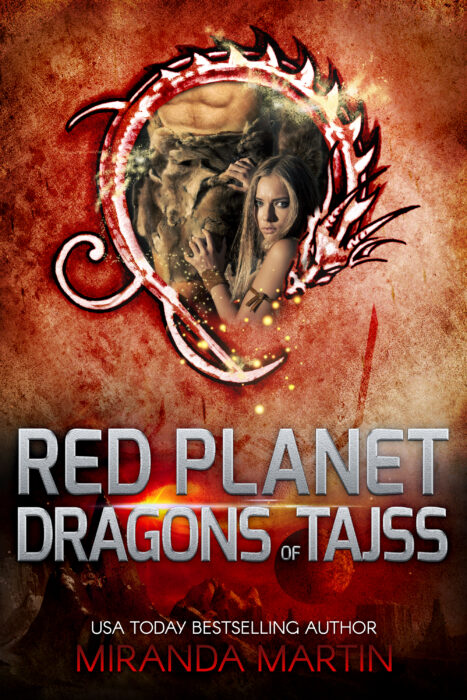 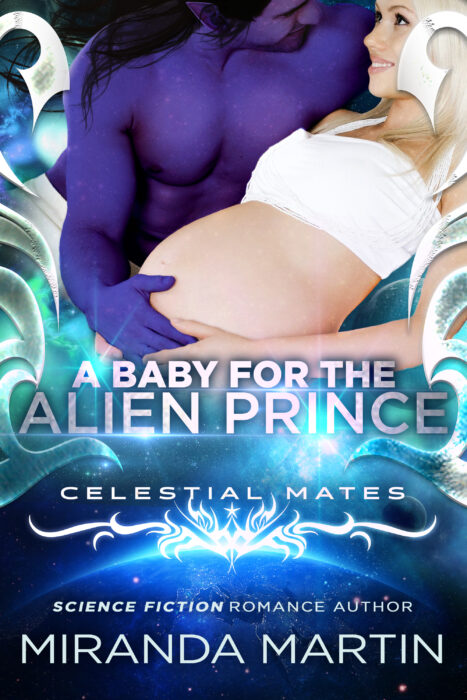 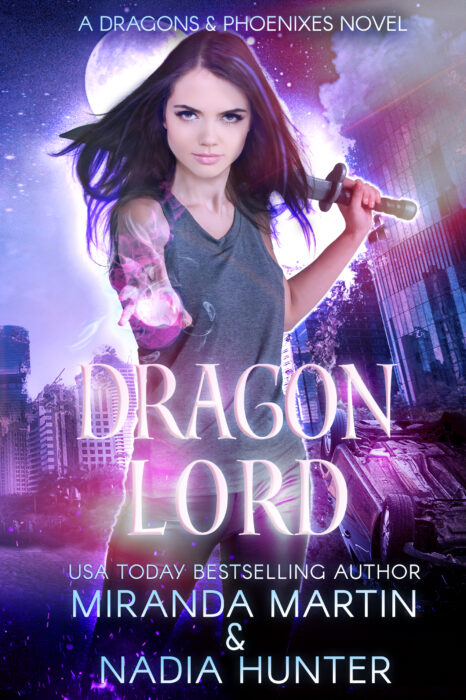 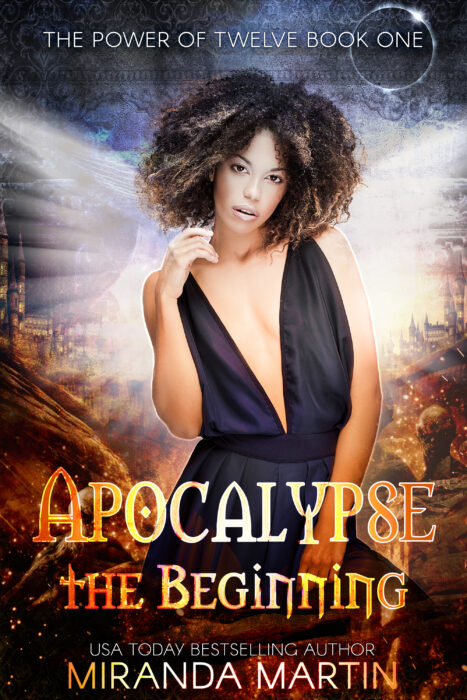 Stolen by a Dragon.
My kidnapper is tall, dark and alien….

My dull, predictable life as a scientific researcher is ripped apart the day blood-thirsty pirates attack our space ship. In the confusion, the ship is thrown off course.

We crash land on a planet that can barely support life.

I’ve escaped the pirates, at least. But I’ve got a new problem. The planet is home to a dragon-alien, and he has his eyes set on me. Ladon, a powerful Zmaj warrior rescues me from the scorching desert wasteland.

Ladon takes me to his lair. I’m his treasure. His mate. He loves my curves and my soft, human form. He makes it clear that he intends to keep me and claim me in every way. The moment he touches my trembling body, he leaves no doubt.

This fierce, protective dragon owns me.

Dragon’s Baby by USA Today Bestselling Author Miranda Martin is a full length, standalone SFR novel with a happily ever after ending, plenty of steam, bloody battles and alien-human intrigue.

After being sold into slavery on an Alien planet, there’s only one person who wants to help Cora escape. But that’s not his decision to make.

She sacrificed her life on earth in hopes of a better future that she won’t even be alive to see. The generational ship should take her there, so that maybe grandchildren she doesn’t even have yet can maybe have a better life.

But those dreams are dashed when the ship is attacked by space pirates. She and a handful of other women end up on the Gladiatorial Planet of Krix where they’re sold into slavery.

Cora’s always been the weird girl. The last picked. So when one of the gladiatorial warriors says she’s his, she thinks it’s the same old game. But she’s going to find out there’s nothing this red-skinned, powerfully built alien competitor won’t do to win her heart.

He wants to show her the pleasures of being his mate, but they are slaves, and their lives on not their own…

Spinning off from best-selling series the Red Planet Dragons of Tajss comes a new series by Miranda Martin and her soulmate James D Horton. Fans of Celia Kyle and Presley Hall are sure to love The Gladiators of Krix!

Scroll up and one click today to read this full length, standalone scifi alien romance with a happily ever after, plenty of steam, thrilling arena competitions, and house politics.

No one was supposed to know. And yet, I do.

I know what’s coming, and it’s up to me to stop it.

The survival of my entire race depends on me.

I’ve never doubted our cause. Until her.

Until I find a secret plan that betrays everything my warrior race has ever stood for. Honor, respect, and treasuring our females.

Scroll Up and One-Click NOW to find out why The Red Planet Dragons of Tajss has been called heart-pounding, enlightening, and deliciously dangerous.

Take a Human female as a mate on the off chance of saving his race? Absurd.

At least that’s what Prince Elorshin Do’ana thinks. It’s true, the Alvan race is dying. There have been no new births in years and if they don’t do something, their entire race is doomed. However, Elorshin doesn’t want to bind himself to a mate that can’t fully share in the fated bond that all Alvan crave. Forced into a marriage by a House more powerful than his own, Prince Elorshin doesn’t think he will ever know happiness, that is until he meets his bright, luscious bride.

Margot Whelan wants two things, one of which she will never have. Love and a baby. The second can’t happen, not as long as she’s on Earth. Population control is too strict. When she sees an advertisement for the Celestial Mates Dating Agency she decides to take the chance. After all, what future does she have on an overpopulated Earth? She agrees to marry the hot, seven foot tall, indigo alien with sparkling emerald eyes and oddly sexy fangs.

He struggles with the war between what his body craves and what his heart needs. Somehow, Margot must get past the language barrier and forge the connection Elorshin so desperately desires. A love that Houses will go to war for.

A Baby for the Alien Prince is a stand alone novel in the Celestial Mates Shared Universe. It is a science fiction romance story with a stubborn alien and an equally stubborn human female, plenty of action-packed adventure, and hot, steamy alien romance!

It’s a suicide mission and I know it.

The world ended when the Dragons and the Phoenixes went to war. Humanity built massive domes around the surviving cities, letting them have the rest of the world. Going outside the domes is stupid. Suicidal. Even for a transporter, like me.

I’m offered a job to transport a sun-sick kid—half-human, half-phoenix—and I’m supposed to take him back to his phoenix family. If that isn’t bad enough, I have to take the kid straight through the Dragon Lord’s territory. The one person on the planet I absolutely can’t run in to.

Except the client impossibly knows my secret, and if I don’t…I’m in the kind trouble that just might cost me my life.

DRAGON LORD is a full-length paranormal urban fantasy shifter novel from USA Today bestselling author Miranda Martin about a girl with a lost history in a world humanity destroyed. It’s the first book in the captivating Dragons & Phoenixes series.

The Power of Twelve

They say I’m the one to save the world. That’s great, but how?

The Third Trumpet of the Revelation sounded, and the world is ruled by the Shadow: monsters, demons, undead, and worse. Humans have retreated into underground bunkers to survive the Apocalypse.

Me? I don’t belong anywhere. Weird shit has happened around me all my life. You’d think with the world literally gone to hell I’d fit in better…but no such luck. I’m still me, still an outcast, and still all alone.

After I’m kicked out of the only home I’ve ever known, I run into four gorgeous men who call themselves mages. It’s a fleeting encounter, but I can’t stop thinking about them until Fate all but kicks down my door with undead monstrosities,

That’s when they return to save me. Efram, Rafe, and Nathanial: a Necroseer, a Demon, and an Angel. Yep, told you shit was weird. They help me escape the fall of the Bunker then vow to be my protectors. They say I’ve got a destiny. That I’m special.

But Tynan doesn’t seem to agree.

He’s also the Horseman of the Apocalypse…and fully under the control of the Shadow.

And if I can’t save him, then the rest of the world doesn’t stand a chance.

Fans of Sarah J Maas and Linsey Hall are sure to love this exciting new series from USA Today bestselling author Miranda Martin!

If you like paranormal dystopian romances, scroll up and one click to start reading The Power of Twelve today!

****
Apocalypse: The Beginning is a slow burn fantasy romance with magic, dragons, demons, angels and one headstrong heroine who has to not only save the world but navigate her way through multiple relationships.

USA Today bestselling author Miranda Martin writes fantasy and scifi romance featuring heroes with out-of-this-world anatomy that readers call 'larger than life' and smart heroines destined to save the world. As a little girl, she would sneak off with her nose in a book, dreaming of magical realms. Today she brings those fantasies to life and adores every fan who chooses to live in them for a while.

Though born and raised in southern Virginia, Miranda Martin is a veteran who's traveled to places like Korea, Hawaii, and good 'ole Texas. She's since settled in Kansas, the heart of America, with her husband and daughters, a cat, and wishes for a pet dragon or unicorn. When she's not writing, you can still find her tucked away somewhere with a warm blanket and her nose in a book.

All of Miranda's books are free to read in the Kindle Unlimited program. Sign up to start binge reading today.